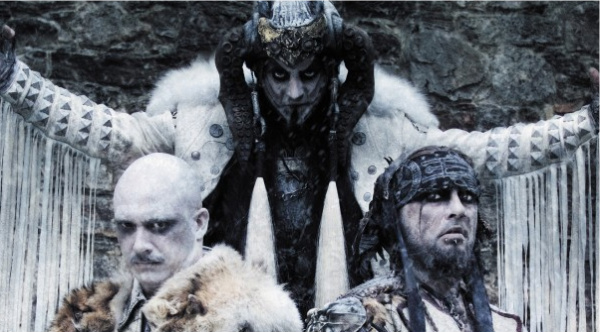 Videos don’t get much more cinematic, beautiful, or nightmarish than Dimmu Borgir’s “Gateways,” which is off of the black metal outfits latest effort Abrahadabra. Rife with expected operatic and symphonic elements, the “Gateways” video is bookended with first a mask emerging from a bath of “milk” and finally the submersion of the mask in “milk.” In between we are treated to a high-contrast and a minimally saturated video stimulation dominated by Dimmu Borgir (along with Agnete Kjolsrud of Djerv and formerly of Animal Alpha) performing in a rundown warehouse. All this white and black, however, is accented by vivid red blood with a woman bathing in it and a fully colored heart beating in the hands of said woman. Director Sandra Marschner (Marilyn Manson, Children of Bodom, Mando Diao) truly earned her keep on this and deserves a Grammy.

While a Grammy might be a bit mainstream for Dimmu Borgir, it’s possibly not that much of a stretch. In the November issue of Metal Hammer, Dimmu defend their position on their shift in style and the firing of Mustis (keyboards) and Vortex (bass and clean vocals). My favorite quote in that interview comes from Silenoz: “If you don’t gamble, you can’t win.