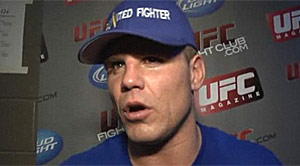 Well it’s been six days since UFC 124 and I’ve finally calmed down enough to put some words down on screen about the Bongfeldt/Natal fight. If you saw the contest, I think you would agree that the judges must have seen something we didn’t.

Bongfeldt, although not dominating from start to finish, handily won this fight. I feel bad for the Natal camp knowing they lucked-out in Bongfeldt’s debut in the UFC.

Bongfeldt, in a post fight interview, reserved his opinion on the results until he sees the video. But you could tell by his fucking demeanor that he thought he’d won. (post-fight video interview)

In the first round Natal made his mark early taking Bongfeldt to the mat a few times and held him briefly against the cage getting in a knee to Bongfeldt’s face. Although a very mild blow, it was the most significant strike of the round. On Bongfeldt’s side, after a shaky start where Natal was on his back trying numerous times for a choke submission, he powered out of every attack and eventually took over by the end of the round.

Right from the start of round two Jesse Bongfeldt took over the fight, you could tell he recovered from the exertion of round one quicker than Natal. Bongfeldt put Natal against the cage and hit him hard. It took a bit of luck and a whole lot of skill to recover and protect himself after the flurry by Bongfeldt so Natal should be congratulated. When Natal grabbed the cage and was warned by referee Dan Miragliotta you knew the fight had definitely swung towards Bongfeldt.

Surprisingly by mid round Natal gained some advantage getting onto Bongfeldt’s back as he did in round one. But Bongfeldt survived it until the bell.

Where rounds one and two were almost even (Natal winning the first, Bongfeldt the second), the third was not even close. Bongfeldt dominated from start to finish. Natal was exhausted and Bongfeldt’s stamina decided this fight. Bongfeldt landed blow after blow, had Natal on his back and against the fence the whole round. The only thing Bongfeldt didn’t accomplish was a KO.

With the third round domination by Bongfeldt, fans were chalking up an eighth consecutive win for the Canadian. Little did they realize that the judges saw the fight in a whole different light. The final decision was a tie.

mma-core.com has the fight if you want to judge it for yourself: